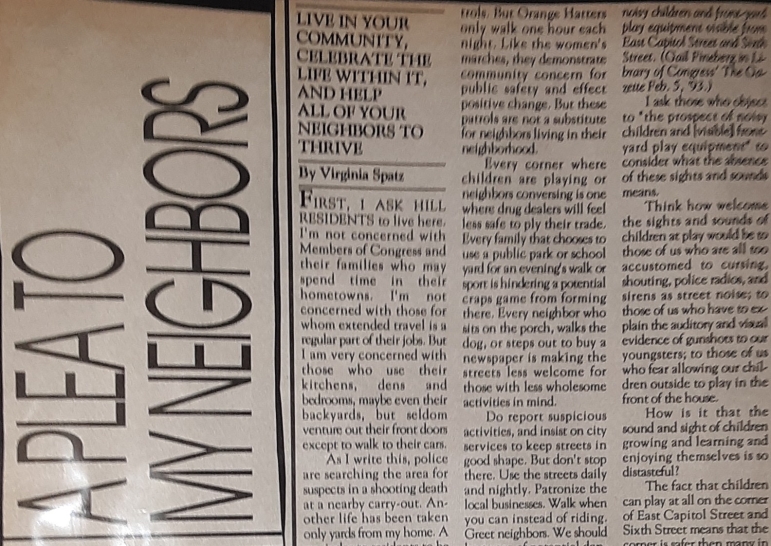 INTRODUCTORY NOTE: In 1992, there were 451 homicides in the District of Columbia, DOWN from the previous year’s total — in fact, 1992 had seen the first drop in shooting deaths in the District since the late 1980s. The number of homicides climbed again in 1993, with 467 homicides and more than 900 nonfatal shootings. (For reference, the number of homicides in DC in 2017 was 119, 2018 161, and 70+ as of June 2019.) In the late 80s and early 90s, my neighborhood, like others in the city, experienced open air drug markets, with the associated nervous lookouts on most corners, high-stakes craps games on the sidewalks and playgrounds, and frequent shootings. Many Black neighbors were killed or injured by gun fire, and Jason White, a white police officer, was shot to death two blocks from our home on 12/30/93. (References.)

For the record, when this piece was published my fair-skinned, blond family were a small minority in a majority Black neighborhood, not yet known as “Hill East.” I would not write the same things today, after two and a half more decades in the District — and more experience with its racialized, too often racist, policing — and given the very different, and far more divided, demographics of the neighborhood….plus, it’s been a long time since I read any Camus. But here, because it’s on my mind (and the Hill Rag was not yet digitizing its content in 1993) is what I wrote then.

A Plea to My Neighbors

Opinion: Live in your community, celebrate the life within it, and help all of your neighbors to thrive
As it appeared Feb 19, 1993 in the biweekly “Washington’s Hill Rag” (now the monthly Hill Rag).

As I write this, police are searching the area for suspects in a shooting death at a nearby carry-out. Another life has been taken only yards from my home. A reminder to residents to be more cautious in the neighborhood and to report suspicious activities might, therefore, seem appropriate here. Instead, I am pleading with my neighbors to fight their fear and try venturing into the streets more often.

I remember watching “Take Back the Night” marches pass my apartment when I was in college. Attempting to call attention to women’s safety issues and fears, hundreds of women marched down my street twice each year. But these women were conspicuously absent on the other 363 days. Most frowned or made snide remarks upon learning my address. Very few patronized the restaurants and shops near my home.

A similar slogan, “take back the streets,” is often heard in community meetings around the city, especially by Orange Hat Patrols. But Orange Hatters only walk one hour each night. Like the women’s marches, they demonstrate community concern for public safety and effect positive change. But these patrols are not a substitute for neighbors living in their neighborhood.

Every corner where children are playing or neighbors conversing is one where drug dealers will feel less safe to ply their trade. Every family that chooses to use a public park or school yard for an evening’s walk or sport is hindering a potential craps game from forming there. Every neighbor who sits on the porch, walks the dog, or steps out to buy a newspaper is making the streets less welcome for those with less wholesome activities in mind.

Do report suspicious activities, and insist on city services to keep streets in good shape. But don’t stop there. Use the streets daily and nightly. Patronize local businesses. Walk when you can instead of riding. Greet neighbors. We should be aware of potential dangers and act with caution. We must, however, take a step. Neighbors, gather your courage, and just do it! Our streets and neighborhoods will be livable if we simply live in them.

Secondly, I ask Hill residents to celebrate the life that does exist here, to support those neighborhood developments which are life affirming.

Consider, as an example, the following news item and the message it sends:

Capitol Hill neighbors settled a feud January 29 over fences and play areas for the Library of Congress Child Development Center at the former St. Cecelia’s school in the 600 block of East Capitol Street, SE….Neighbors objected to the height of the fence and also to the prospect of noisy children and front-yard play equipment visible from East Capitol Street and Sixth Street. (Gail Fineberg in Library of Congress’ The Gazette Feb 5, ’93).

I ask those who object to “the prospect of noisy children and [visible] front-yard play equipment” to consider what the absence of these sights and sounds means.

How is it that the sound and sight of children growing and learning and enjoying themselves is so distasteful?

The fact that children can play at all on the corner of East Capitol Street and Sixth Street means that the corner is safer than many in the District of Columbia. Appreciate its safety. Take advantage of it. And, for the community’s sake, don’t hide it. Every corner where children can and do play is a corner unavailable to those with less wholesome activities in mind.

No, allowing children to play visibility in front of the Library of Congress Child Development Center will not cure the community’s ills. But an empty building will be well used. Some adults will be employed, and many children will thrive and have closer access to their parents. What was once a monument to decline will become a pillar of growth in our community. This should be flaunted, not hidden.

In Albert Camus’ The Plague, the disappearance of cats from the city is one of the first signs of rampant disease. I believe the disappearance of positive activities, including children’s play, from our streets is a similar sign. The cats did eventually come back, and the Black Death receded into history. But we can’t wait for a quarter of our population to disappear.

I ask Capitol Hill neighbors to re-evaluate concerns for the looks and historical correctness of the streets and make sure they don’t conflict with concern for the life of the community itself. I also ask those who don’t ordinarily do so to take consideration of the appearance and history of the neighborhood. We haven’t any more time to waste in squabbling or hesitation. A community malaise is upon us and we must unite for the health of the Hill. We must join together now to live and celebrate life.

Finally, help every member of the community to thrive here.

We cannot limit our community involvement to protecting our own property and safety. We must use our talents and resources to create other opportunities for those who feel trapped into accepting dangerous and illegal business propositions, and to support for create initiatives which teach children self-esteem and respect for life.

We must work toward a goal of a community in which each member can live and thrive. Then there will be even more life to celebrate on Capitol Hill.

Virginia Spatz is a Capitol Hill resident who lives north of Lincoln Park. She is a frequent contributor to this magazine.

A few articles for background
The Atlantic 2000

The fatal shootings of three people last night [Dec 18, 1993] brought the number of slayings in Washington this year to 454, surpassing the total for last year and dashing the hopes of city leaders who had looked for a continued downturn in violence.

Last year’s total number of homicides, 451, represented the first decline since a wave of killings began building in 1986, but 1993 has proved to be a bloody year that will become at least the third worst ever for homicides in the District, after 1991 and 1990.